skip to main | skip to sidebar

Recently Steve from The Easy Life gave me a couple 1 of 1 autographs. For absolutely nothing. I couldn't believe it. I'm going to do a post on each of these. Thanks again Steve. You're the man. 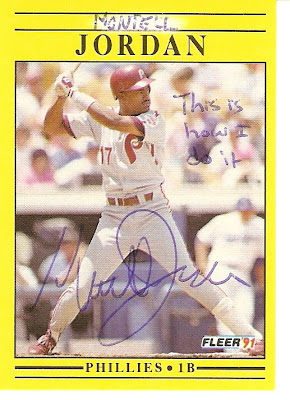 We'll start with the first one he gave me. This is Montell Jordan. This guy has had one remarkable life. He grew up in the tough streets of Detroit, Michigan. He was raised by his mother after his father was killed in a freak lawn dart accident. Following his fathers death Montell fell in with a bad crowd called the E Street Band. This however did not last long. One day while Montell was out selling crack, Bruce Springsteen showed up and took the whole crew on the road with him. That is except for Montell.

By now Montell became very depressed. He had severe abandonment issues. At this point he decided that he would concentrate on his schooling and hoped to one day become a TV talk show host. He later got his wish and worked daily with the constant drama of baby daddies and transvestites. At first he was happy, however as time went on he felt this emptiness inside him. He finally snapped one day when Oprah Winfrey guest starred on his show and asked Montell to play a game of lawn darts. Montell picked up a baseball bat and beat Winfrey within an inch of her life.

Since his show aired live this was seen throughout the world, including Philadelphia. And it was in Philadelphia that some Phillies executives marveled at the way he could swing the bat. After his trial, which ended with the jury somehow finding him not guilty, he was invited to Phillies Spring Training in 1991. At first it looked like his career would be over before it really got started. He was batting .074 midway through spring training when manager Jim Fregosi told him to envision the baseball as Oprah's head.

And just like that he was a changed man. His batting average shot to over .300, his play in the field however was to say the least unique. Since he was picturing the ball as Oprah's head he would actually kick the baseball instead of throw it. When asked by reporters why he did this he replied in what would become his and the teams motto "This is how I do it"

Unfortunately he was not able to "do it" very long. He played just the one season in the Majors before he failed a psych evaluation. He was sent and still resides at the Keystone Center Psychiatric Hospital in Chester, PA.

Steve I have to thank you again for this as well as the other cards you gave me. I will be posting them as time goes by and sharing these players unique stories with everyone.

**The events and characters depicted in this post are entirely fictitious. Any similarity to actual persons, living or dead, or actual events is purely coincidental**
Posted by I Am The Average Joe at 3:09 PM

Nice post. I'm appreciate it. By the way I also will share new article from my blog.

I Am The Average Joe